What I really wanted to do though, was my 50k then sit around drinking, eating and cheering on clients from the comfort of my camp chair.

Neither of those scenarios really panned out...

Heather and I have done this race twice before. It was our first 100k back in 2016, then our first 100m in 2017.
Our first year was just the two of us, somehow in 2017 we dragged up 20 something people to camp and race with us. This year we dragged up maybe 15 but also had a handful of clients there!

The quick takeaway here is that this is not only a great race, but a great social event. I'll be elaborating on that more over then next three million words...or you could just cut out now knowing this race is great. Your choice.

We were introduced to Upstate Ultras at Paris Mountain back in 2015. We've always had a great time at Upstates events, living four to five hours away makes it hard to get to all the Upstate events, but it's always worth it.

Here's my race story/review...whatever you want to call it:

Our buddy Paul picked us up in his kick-ass van (it's really great to have an adventurous bud with a van) and we were on the road by 8am. I spent a good amount of time on the ride studying for my upcoming Pharm Tech exam. In fact, I should be studying right now, not dicking around writing a blog nobody reads.

It only took us 4hrs to get to Conestee Nature Park, the venue for this event. To our surprise there was already a good amount of people there setting up. There's a HUGE amount of space to set up your camp, but there was a particular spot we wanted. We would ultimately end up with three pop-up canopies, four or five tents and a couple of cars.

After finally getting all our shit set up we walked over to Rego to shoot the breeze with the RD. Not only is Matthew fast as hell, he's friendly as f*ck too.  I hope I have a picture of the kickass new hat we got from him.
I do, it's at the bottom of the blog.

The weather had been iffy, that's a word, most of the morning. Around 2pm though...it got beautiful out. Hot and sunny! People were trickling into the venue and our camp grew throughout the afternoon, our clients came in, some local friends arrived and we made new friends.
I'm not sure how/why we attract so many new friends at these events, but I'm really glad we do. John, if you happen to read this, here's a huge thanks for helping out the way you did man!
I would guess at this point, maybe four o'clock, there's about a dozen of us kicking around drinking cognac (thanks Paul!) and shooting the breeze. Our race doesn't start until 8pm, so what the hell else are we going to do? I would have busted out the hacky sack, but there were now enough folks around to make that dangerous (to them, not me). The RD hangs out with us a good bit and our buddy Eric drifts in and out of camp.
I'm telling you, Ultra camping is where it's at.

Let's get to the race details.
This race draws a super diverse crowd. I can't get into too many details, mostly as I don't know them, but RWB and Enduring Warrior have some affinity with this race.
It's not uncommon to see an athlete running in a gas mask and there will always be at least one American Flag on course. This year you would see athletes running with a mannequin leg which had an official bib and timing chip on it.
You would see a blind athlete complete a hundred miles.
You would also see a man, truly given a second chance, finish his 50k.
I can't give those stories the justice they deserve. But I recommend looking into them.

7:40 or so the RD gets all the 100 milers together for the race briefing. You know the normal stuff? Well, this wasn't the normal stuff. I've never been brought to tears during a race brief before. There's some real heavy shit here, heavy, but also amazing.

For some reason at the eight o'clock start time, Heather and I found ourselves towards the front of the starting pack. Maybe I look like I know what I'm doing?
I don't. I'm still learning. Every race I learn.

We start on the sidewalk just in front of the pavilion. A few hundred yards up we dip into the woods. This section is a bit technical. There's roots, rocks and re-bar. You need to watch your step as the trail winds up, down and left to right.

Trail spits us onto some pavement, right at a pretty major trail crossing, where we bang a right over a bridge. It's a pretty bridge. Hope I can find a picture.

It's only a short run down the road before slipping back into some singletrack. Ya know, I've run section thirty odd times and still can't think of anything remarkable about this quick section.

Back on to some pavement, again just for a short while before singletrack takes you up what I called the Green Hill. This was a really pretty area to run in. The trail was that neat upstate red clay type of terrain cutting through a field. There's trees at the summit with picnic tables circling them. The kind of place you just want to sling a hammock and have a beer. 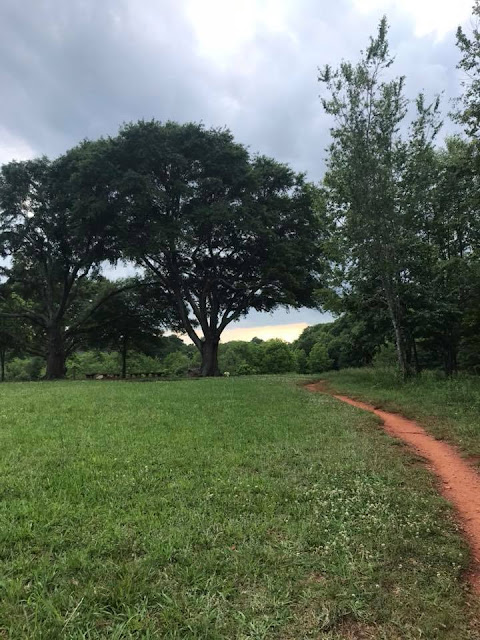 After descending Green Hill a right hand turn brings you onto pavement to Aid Station II. This was an unmanned station of H20, Tailwind and some Fuel 100 Electro-bites, or as another runner called them "Shitty Teddy Grahams" (I like 'em, just needed lots of water to go with them).

A sharp left brings us into a slightly swampy area. There's a wooden bridge or two, some frogs and some ducks. It's nice.

Back on to pavement, up a little hill then back into the woods. This section was a little more swampy than the slightly swampy area. There's a good size observation post and several benches to sit on.


It's all still foggy. My memory is foggy. I never noticed fog on course.

Some boardwalk, which although feels a bit slick, makes for some really great running. The rebound and energy return is great. This boardwalk run is brief before taking a left into a swampier area that was even more swampy than the slightly more swampy area. But this isn't Low Country Swamp, so it's pretty run-able.


Back to pavement and across the bridge to the dreaded Lollipop section.
We called it a lollipop because this section was an out and back with a loop at the end.
We call it dreaded because the top of the loop can be balls hot, there's a climb, and as it's and out and back, there's a lot of traffic. Oh, it's also a climb out of the lollipop back to the paved walking path which brings you past a bunch of tents and into the finishing/timing chute.

Damn, that's a lot to read. Try typing that with a cat half on your keyboard.

Now that I've gotten the course description out of the way, here's some other points.
The timing guy was spot on and very attentive. Hell, we even saw him chase down an 8k guy that did 2 extra loops for fun.
The Aid Station at the line was great. If it wasn't the RD himself, there was another friendly volunteer or two there to help you with anything you might need off the huge food table.
There's some really damn fast kids in Greenville.
I also need to mention again that this race attracts more than just the normal Ultra community. When was the last time you saw a blind dude knock out a hundred mile trail run?

There's a free One Mile Kids Run, an 8k, a 50k, a 24hr Relay and the 100 Miler. So take your pick. Rego for 2019 opens May 23rd.
Look for the big orange tent, the hot chick with blonde braids and the ugly skinhead with tattoos and a limp, because you know we're going to be there.