Most of our local, and many of our non-local, friends knew that the wife and I were going through some pretty severe financial shit over the past few months.
We'd both just been fired from the same job, and we don't have any kind of savings account to draw from.
Our unemployment was denied.
We've one car between us and need to feed anywhere from 8 to 10  different mouths every day (Two athletes, two cats, three bunnies, one fish and every other week we've Heather's bilge rats).
I won't bore you with too much sob story, but shit was getting pretty rough. 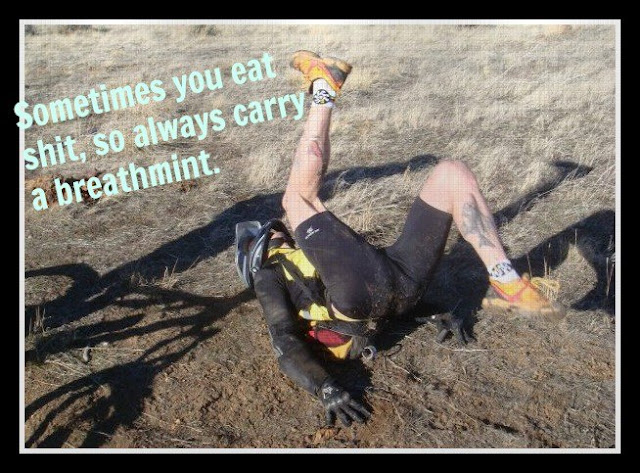 Over the last couple of weeks though, things started going upward again:

Heather got a job at American Fitness as their Head Personal Trainer, a job she's most qualified for and she thoroughly enjoys.

Our Run Coaching business is going well and I'm taking on more of that. I will get re-cert'd as a Personal Trainer soon, and perhaps get my Level 3 USAC Cycling Coach Cert also.

I've started taking both Welding and Pharm Tech classes which are both state sponsored. (Love my liberal friends!!)


We've gotten our wimpy, scrawny runner bodies back in the gym.


The days are getting longer.

We started a working relationship with Eagle Endurance. And we also became official SCUMbag Ambassadors (that's South Carolina Ultra Marathoners for you non-runners).


We've realized again and again that we're perfect for each other. On soooo many levels. And we still boink like newlyweds.


(Insert your own imaginative picture here)


Things aren't exactly what most people would call great, but Heather and I are about back up to our normal standard of living. We can afford soap. We might have pancakes with blueberries instead of just pancakes, or semolina pasta instead of rocks.
You get the idea.

So anyway, we had a lot of people stand by us during this shit, some visibly and verbally, and some quietly and behind the scenes. You know who you are!! :)
I really want to thank you all so fucking much. We're not completely out of the woods yet (NO pun intended, I like the woods), but you all got us through the hardest times.
Until we can afford to take you all out for beer and food, I look forward to camping, hashing, running, racing, laughing, and all that shit, with all of you!!!

Thanks for reading, sorry about the sappy-ass post. It's raining out and I'm feeling introspective.
Now I think I'm going to play some Gears of War and drink a beer or two.
Posted by Bigcatbox at Sunday, January 28, 2018