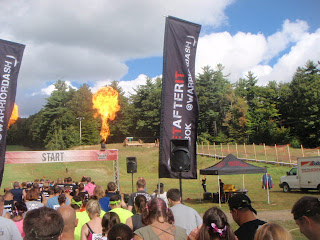 So when the flames shot over the top of the corral and we started uphill, I was figuring it’d be piece of cake.(And I really enjoy cake.) Because I’ve been running Wintastaquit so often lately, I am afraid of no mountain. But man…this just kept on going!! Fortunately the course’s terrain wasn’t too bad. Nice enough grass, no mud, no slippery slope, just up. Some pretty steep parts, but nothing requiring a scramble. 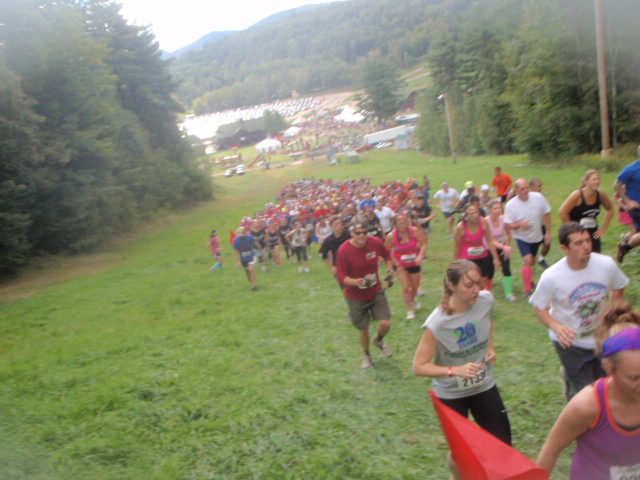 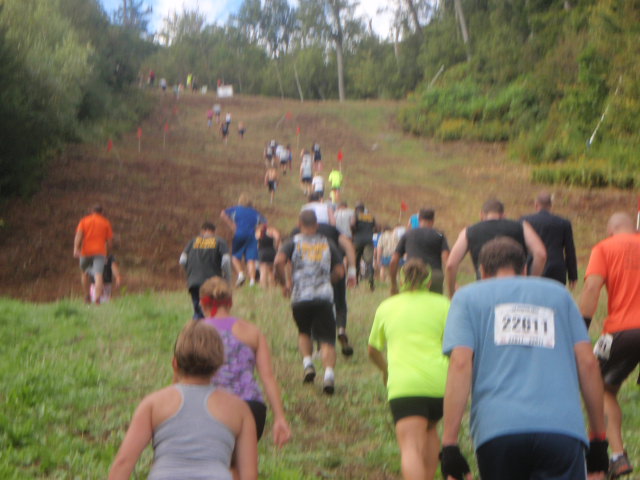 First obstacle is a barbed wire crawl. Nothing too nasty here. The ground wasn’t beaten to a pulp, so no major dirt. The wire wasn’t set so low that I had to crawl like a snake. Under the wire I go, thru a net and on to the next. (Pictures are mostly of my girl) 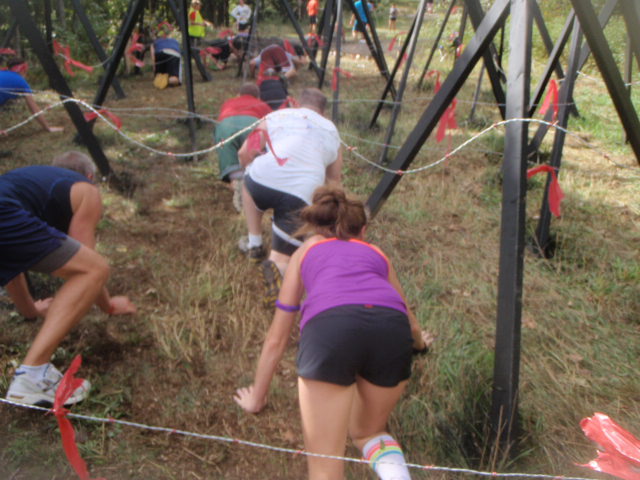 The second obstacle was a real fun Over\Under thing. Over a waist high wall, then under a beam. I gotta tell you, this would have been super fun if I wasn’t carrying the camera. Trying to clear these walls quickly with a camera in your hand is a pain. Doing them slowly however, is easy. And that’s what I did. You could get into a nice rhythm on this obstacle. Jump and duck, jump and duck… 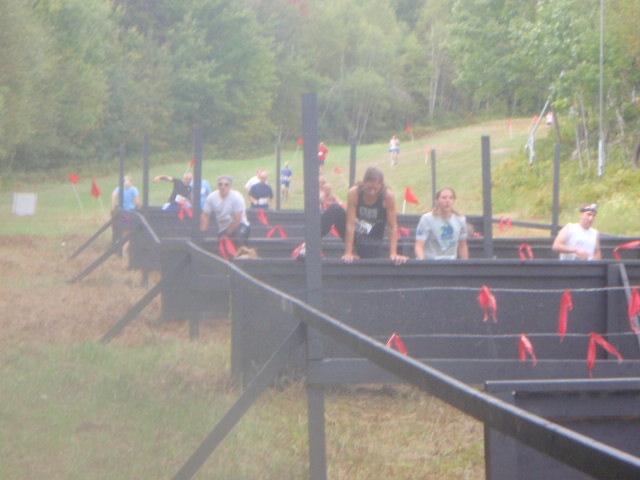 Downhill run. Down a skis slope run in fact. The terrain here still not too bad. It’s a bit slippery just from the grass itself, and a bit steep in places, but not horrible if you’ve been running trails.


Obstacle 3! A kick ass dirt crawl, under barbed wire. Through a rough trench with barbed wire overhead. I half expected to see tracers…. No mud in the trench, but some good sized rocks to beat up your hands and knees a bit. 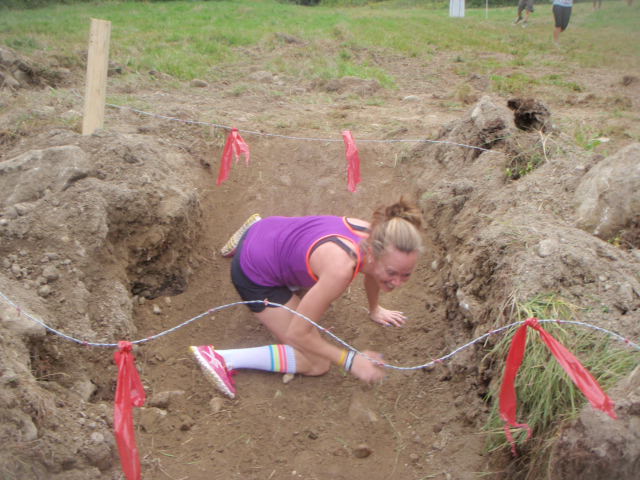 Some more running, then Obstacle 4, a really cool balance board type object. This would have been quite treacherous if we were muddy or wet, but hitting it dry wasn’t too awful. The planks to the top had nice rungs on them for secure footing, but the top center beams were smooth. 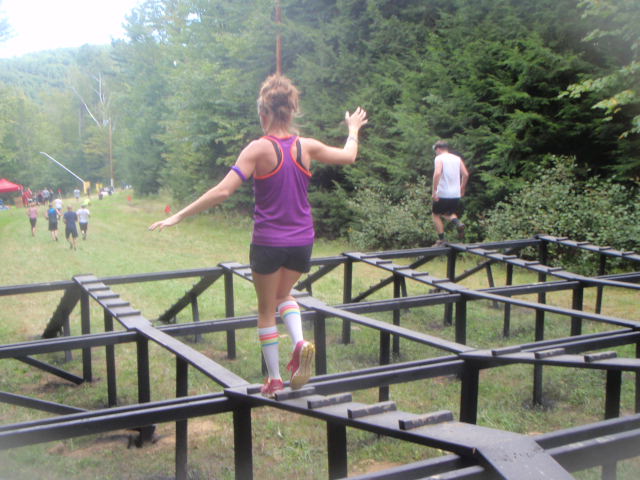 The views from Gunstock are striking. My camera cannot do them justice so I won’t post pictures.


Uphill again, this time on a beat up fire road, to Obstacle 5. I really liked 5. It was interesting to see people second guessing themselves on this one. Grab the knotted rope and scale the wall. Coming down the other side was a basic ladder descent. Pretty fun stuff! The whole time I couldn’t help but wonder how cool it would be if this obstacle was surrounded by flames…I know, logistical nightmare. But the thought entertained me for a bit. 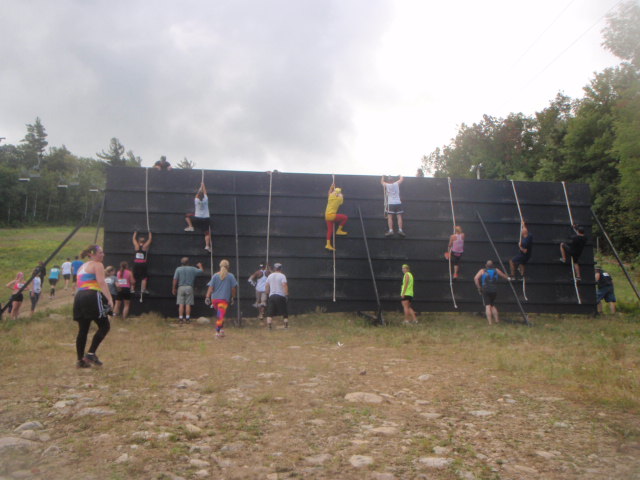 Obstacle Six, after some more fire road, is a really cool net obstacle. You first climb up a bit, onto a net, then you must traverse the net across, oh I don’t know, maybe 20ft? Then climb down the other side. I did see a hero or two start to run across the net. Hell, they probably could have made it if it were clear of other competitors. 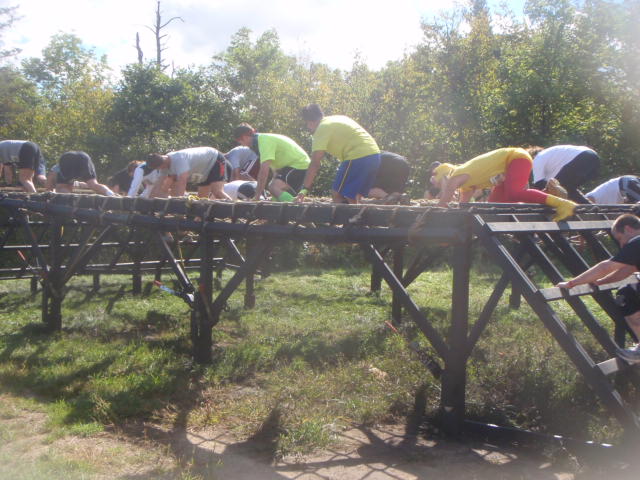 A short run takes us to Ob #7 (I don’t feel like typing Obstacle anymore so I’m going to abbrev.)


Ob7 is this cool Up and Over kinda thing. The way up was a sloped ladder climb, but once you got a leg over the top, there was one step about a quarter of the way down, then a drop to the ground. I’d guess 12-15 feet maybe total height, So maybe a ten foot drop? 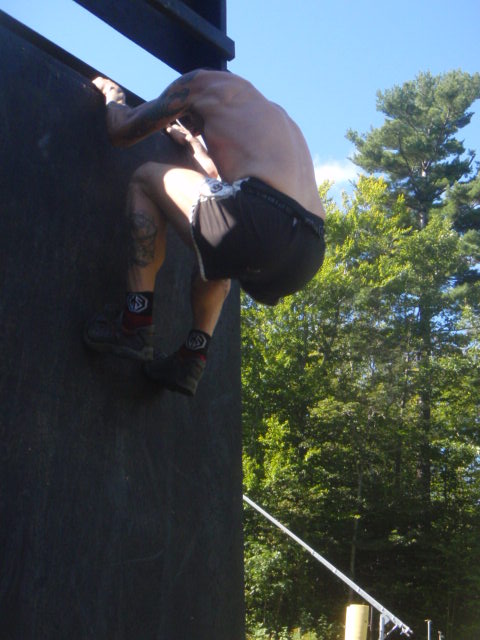 Some more down hill. And no here’s the pisser about my day…I’d been cruising thru this. I’m out here to just take pictures for the girly, I’m not racing, I’m strolling most of the stuff and breezing the obstacles because I’m not winded. I’m having a grand ol’ tyme! Until….and Heather even heard it…until…POP! I roll my damn ankle. Yep, I’m walking down a grassy slope. WALKING!! And I roll an ankle. Sheeeeet. Thank god, no pain, just that sudden nausea that you get cause you know your out of the game for a while…and you know it’s gonna hurt later…


So Ob Eight is a fun kind of slide doo-dad. A big black tarp with a snowmaker blowing water onto it. There are trenches under the tarp big enough for set of buttocks to slide down. There’s also a pretty rainbow from the sno-gun. I cant slide down this. I have no idea why. I tried a few times but instead stood up and hobbled my way down. 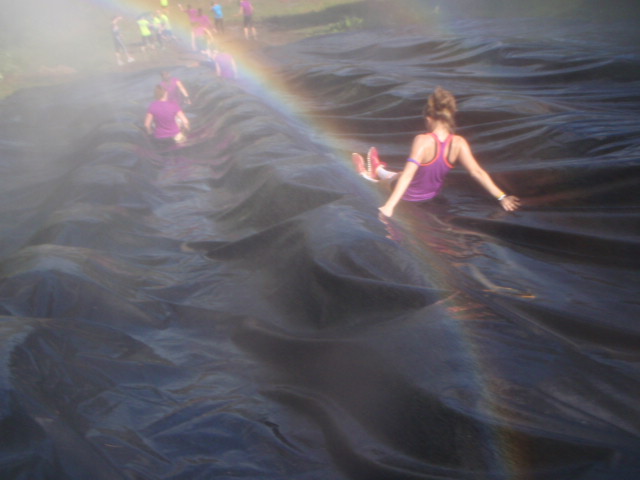 A short run to the next obstacle, which is actually being broadcast live to a monster TV down in the festival area. Neat idea! Very spectator friendly.


Number Niner is a standard Cargo Net up and over. No biggy, although I did feel a little bad when I got on the net next to Heather and the net started bending to my weight…fat Geoffrey… 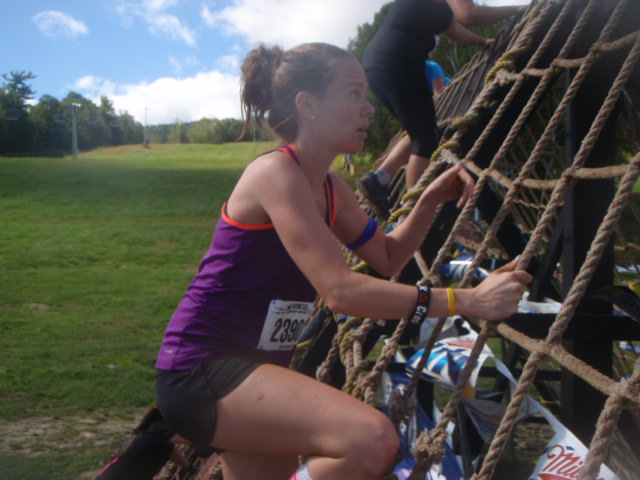 Ten is a Fire jump. Over some burning wood, in fact I think this was Dura-Flame brand wood. Was there 4? Four fire jumps I think.


MUD! The first mud in the race in fact! Under barbed wire thru nasty mud. It almost seemed like thin concrete mix. It was a very interesting color and nice smooth consistency. I mean, I wouldn’t wanna eat it, but it was smooth. 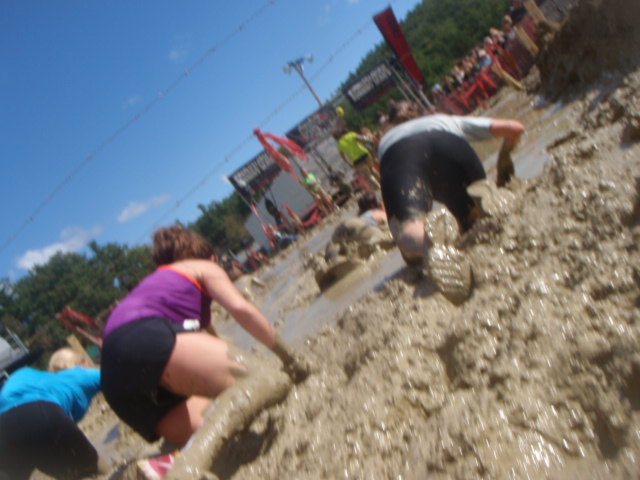 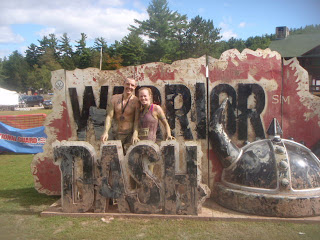 I have not done any other Warrior Dash events, but I feel pretty strong that this particular one would have been a great first time OCR for anyone not sure about OCRing. Although the hill climbs were challenging, if you can walk, you can make it up a hill, and with only 11 obstacles… Not being soaked to the bone for an entire race also has a nice beginner appeal too.

All of the obstacles were very well built. Solid frames on the wooden obstacles etc. The addition of the snowmaker on Ob8 was pretty cool. All the fun signs on the course were great motivators. The mud at the end was great for the spectators.
We did get some cool swag from the event. The free Tshirt is of very nice quality. The finisher medal is pretty cool. The funny little hat makes a very nice addition to any Hash. (See other posts if you aren’t familiar with Hashing)
I was also able to buy a fun little Kilt Beer Cozy thingy and a bottle opener.
I look forward to trying another Warrior Dash to compare the Gunstock event to rumors of other Dashes I have heard of.